Everything seemed to be going the Phillies’ way. Up by 6 1/2 games with just 12 left to play in the 1964 season, they appeared to have clinched their first pennant in more than a decade. Outfielder Johnny Callison narrowly missed being the National League MVP. Third baseman Richie Allen was Rookie of the Year. But the "Fightin’ Phils" didn’t make it to the postseason—they lost 10 straight and finished a game behind the St. Louis Cardinals. Besides engineering the greatest collapse of any team in major league baseball history, the ’64 Phillies had another, more important distinction: they were Philadelphia’s first truly integrated baseball team. In September Swoon William Kashatus tells the dramatic story—both on the field and off the field—of the Phillies’ bittersweet season of 1964.

More than any other team in Philadelphia’s sports history, the ’64 Phillies saddled the city with a reputation for being a "loser." Even when victory seemed assured, Philadelphia found a way to lose. Unfortunately, the collapse, dubbed the "September swoon," was the beginning of a self-destructive skid in both team play and racial integration, for the very things that made the players unique threatened to tear the team apart. An antagonistic press and contentious fans blamed Richie Allen, the Phillies’ first black superstar, for the team’s losing ways, accusing him of dividing the team along racial lines. Allen manipulated the resulting controversy in the hopes that he would be traded, but in the process he managed to further fray already tenuous race relations.

Based on personal interviews, player biographies, and newspaper accounts, September Swoon brings to life a season and a team that got so many Philadelphians, both black and white, to care deeply and passionately about the game at a turbulent period in the city’s—and our nation’s—history. The hometown fans reveled in their triumphs and cried in their defeat, because they saw in them a reflection of themselves. The ’64 Phillies not only won over the loyalties of a racially divided city, but gave Philadelphians a reason to dream—of a pennant, of a contender, and of a City of Brotherly Love. 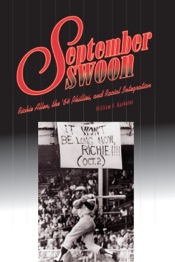