This is a story about the dirty secrets of the most powerful people in the world—including Donald Trump.

It is based on exclusive interviews with dozens of high-level sources—intelligence officers in the CIA, FBI, and the KGB, thousands of pages of FBI investigations, police investigations, and news articles in English, Russian, and Ukrainian. American Kompromat shows that from Trump to Jeffrey Epstein, kompromat was used in operations far more sinister than the public could ever imagine.

Among them, the book addresses what may be the single most important unanswered question of the entire Trump era: Is Donald Trump a Russian asset?

The answer, American Kompromat says, is yes, and it supports that conclusion backs with the first richly detailed narrative on how the KGB allegedly first “spotted” Trump as a potential asset, how they cultivated him as an asset, arranged his first trip to Moscow, and pumped him full of KGB talking points that were published in three of America’s most prestigious newspapers.

Among its many revelations, American Kompromat reports for the first time that:

• According to Yuri Shvets, a former major in the KGB, Trump first did business over forty years ago with a Manhattan electronics store co-owned by a Soviet émigré who Shvets believes was working with the KGB. Trump’s decision to do business there triggered protocols through which the Soviet spy agency began efforts to cultivate Trump as an asset, thus launching a decades-long “relationship” of mutual benefit to Russia and Trump, from real estate to real power.

• Trump’s invitation to Moscow in 1987 was billed as a preliminary scouting trip for a hotel, but according to Shvets, was actually initiated by a high-level KGB official, General Ivan Gromakov. These sorts of trips were usually arranged for ‘deep development,’ recruitment, or for a meeting with the KGB handlers, even if the potential asset was unaware of it. .

• Before Trump’s first trip to Moscow, he met with Natalia Dubinina, who worked at the United Nations library in a vital position usually reserved as a cover for KGB operatives. 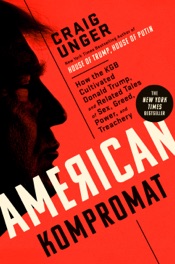