Read David Farley's posts on the Penguin Blog.A tour through the centuries and through a bizarre Italian town in search of an unbelievable relic: the foreskin of Jesus Christ

In December 1983, a priest in the Italian hill town of Calcata shared shocking news with his congregation: the pride of their town, the foreskin of Jesus, had been stolen. Some postulated that it had been stolen by Satanists. Some said the priest himself was to blame. Some even pointed their fingers at the Vatican. In 2006, travel writer David Farley moved to Calcata, determined to find the missing foreskin, or at least find out the truth behind its disappearance.

Farley recounts how the relic passed from Charlemagne to the papacy to a marauding sixteenth-century German solider before finally ending up in Calcata, where miracles occurred that made the sleepy town a major pilgrimage destination. Blending history, travel, and perhaps the oddest story in Christian lore, An Irreverent Curiosity is a weird and wonderful tale of conspiracy and misadventure. 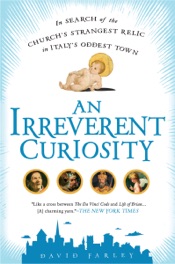