THE ATOMIC TIMES is the absolutely insane, incredibly f*cked-up, but true, eyewitness story of what happened in 1956 on a tiny island in the South Pacific when over 1600 young soldiers (including me) were turned into atomic guinea pigs by the US Army.

We were sent there to “observe” a nuclear test series, called Operation Redwing. Wearing only T-shirts and shorts and without any other protective gear while Army brass and nuclear scientists wore Hazmat suits, we were exposed to radiation and fallout.

Major Maxwell, who put Safety First, Second and Third. Except when he didn't.
Berko, the wise-cracking Brooklyn Dodgers fan forced to cope with the H-bomb and his mother's cookies.
Tony, who thought military spit and polish plus uncompromising willpower made him an exception.
Carl Duncan, who clung to his girlfriend's photos and a dangerous secret.
Major Vanish, who did just that.

In THE ATOMIC TIMES, Michael Harris welcomes readers into the U.S. Army's nuclear family where the F-words were Fallout and Fireball.

A New York Times bestseller and a Pulitzer Prize nominee, THE ATOMIC TIMES was originally published in hardcover by Random House.

"Harris uses a chatty, dead-pan voice that highlights the horrifying absurdity of life on the island:  the use of Geiger counters to monitor scrambled eggs' radiation level, deformed fish swimming in the lagoon, corroded, permanently open windows that fail to keep out the radioactive fall-out and men whose toenails glow in the dark. (The money initially earmarked for enlisted men's goggles was diverted to buy new furniture for the colonel's house. 'Goggles are important,' Harris is told. 'But the colonel's furniture is important, too.') An entertaining read in the bloodline of Catch-22 Harris achieves the oddest of victories: a funny, optimistic story about the H-bomb." —Publisher's Weekly

"Harris' frank and disturbing descriptions of the criminally irresponsible proceedings on Eniwetok, and the physical and mental pain he and others endured, constitute shocking additions to atomic history. Amazingly enough, given his ordeal, Harris remains healthy.” —Booklist

"A gripping memoir leavened by humor, loyalty and pride of accomplishment. A tribute to the resilience, courage and patriotism of the American soldier." —Henry Kissinger

"One of the best books I've ever read, combining elements of Catch 22 and Dr. Strangelove in a memoir both hilarious and tragic. A 'must' read, destined to become a classic." —John G. Stoessinger, Ph.D. (Harvard), winner of the Bancroft Prize for Inernational Affairs, member of the Council on Foreign Relations

"Harris has seamlessly presented a colorful cast of characters, and a shockingly honest depiction of his experience. The effect is at once deeply personal and politically profound." —Senator Charles Schumer 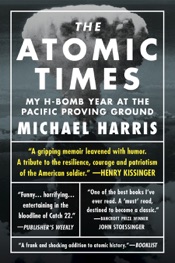